‘Another’ new restaurant in Canberra

For several years Canberra had a Belgium Beer Cafe which was a good place to go for a drink on a Sunday afternoon and then one day it was gone; not sure why as it was always full of people but some months ago, in its place was a new restaurant called Otis Dining Hall..which certainly is not a hall in the true sense of the word but a fabulous restaurant.

I booked a table (for me and my friend Jane) one Saturday evening in June.

When I dine out if I see a dish with cheese in it, I always ask can the cheese be removed as I do not eat cheese containing animal rennet and this time was no different as the dish I liked the look of was the pumpkin ravioli dish.  I wasn’t sure if there would be a shaving of parmesan so I asked the [very] young waiter if this could be done and he immediately told me it couldn’t.  I was surprised as the cheese was not inside the ravioli nor part of the dish, so I asked him if he was sure and he said he was and that cheese on a dish could not be removed.  I was rather [very] frustrated and asked him if he could ask the chef (who actually makes the meal!!) which he reluctantly did…and surprise surprise the chef said ‘yes’ the dish could be made without the shaving of cheese.  grr!!

So after this ordeal, I did order the pumpkin ravioli with  sage burnt butter, a hen’s egg and amaretto…and it was definitely worth it – absolutely delicious..

Jane, who apologied to me first (because I am completely vegetarian and and lover of all animals) ordered the salted wallaby tartare with pickled vine leaf, macadamia nut floss and burnt onions.  The wallaby is a small Aussie animal and I think just a smaller version of the kangaroo and I really didn’t think it was an animal we ate, but I guess all animals can be eaten. Jane said it was good but next time would probably order seafood [her favourite]. 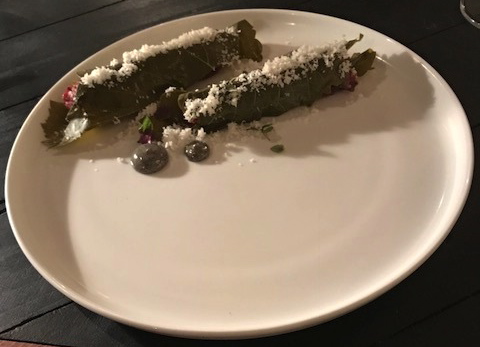 It was at this time I asked for an ice bucket for our wine as it hadn’t arrived with our bottle, well I asked twice really [again to our young and inexperienced waiter] and in the end Jane had to insist on one…it was a little frustrating but not the biggest issue in the world…

For main course I ordered the forest mushroom gnocchi with pickled chestnut mushrooms, pine nuts and taleggio cheese (I asked for the cheese to be removed and funnily enough this time it was ok).  So delicious!!

Jane ordered the Otis pepper steak with  silk-wood brandy jus and a side of french fries – it was funny though as that was exactly what it was…steak on a plate with nothing else…I suppose I think there could be some greens somewhere on the plate – but no!!

I ate the fries as Jane is not a big eater of chips!! (lucky me).  No dessert for either of us as we were very full but this is what we can expect… 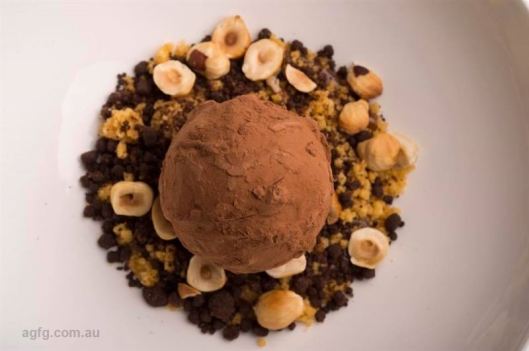 Other friends of mine have eaten at this restaurant and actually asked me about the service; like me they found it wanting – maybe it’s because it’s new and the staff are young but the food is definitely worth a return visit.