During my visit to Phnom Penh earlier this year, my friend Tracey and I took a Tuk Tuk to the Royal Palace as it was our last day in the country and we wanted to take a look around.  The palace opens at 8am but we arrived around 9am and even by this stage it was about forty degrees celsius; with humidity. Yuck!!

All visitors must conform to dress standards; shoulders and knees covered which meant a top with sleeves and a mid-length skirt or three quarter pants as long as your knees are covered.

We paid our entry fee and with our ticket we received a map of the complex and grounds.  We started out with a general walk around the central compound, through the beautifully manicured gardens, looking at large pots containing water lilies and lovely topiary trees…all this with the sun burning into our skin as we both had forgotten to bring umbrellas… 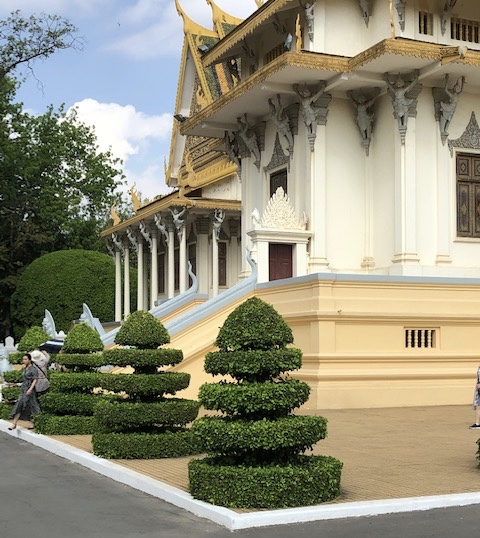 We particularly wanted to see the Royal Stupas and The Silver Pagoda so checked out our trusty map to find both. From outside the walls of the Royal Palace, it looks like the palace compound and The Silver Pagoda are located in the same area, however they are two distinct compounds, separated by an alleyway and gates but your entry ticket gets you into both areas.

The complex of The Silver Pagoda is made ​​up of several buildings and statues, stupas and more beautifully landscaped gardens.  There are four Royal Stupas and each is intricately decorated and a memorial to a member of the Royal family. 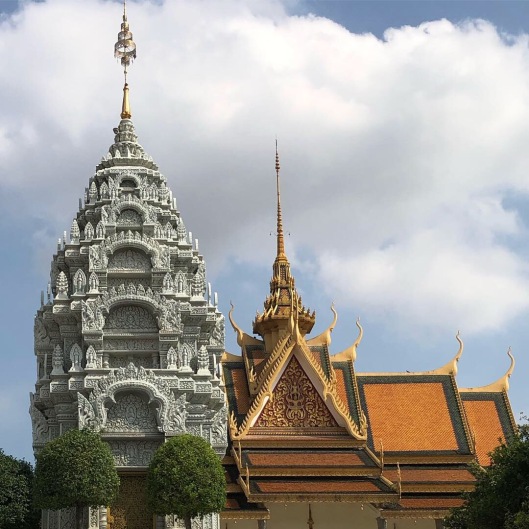 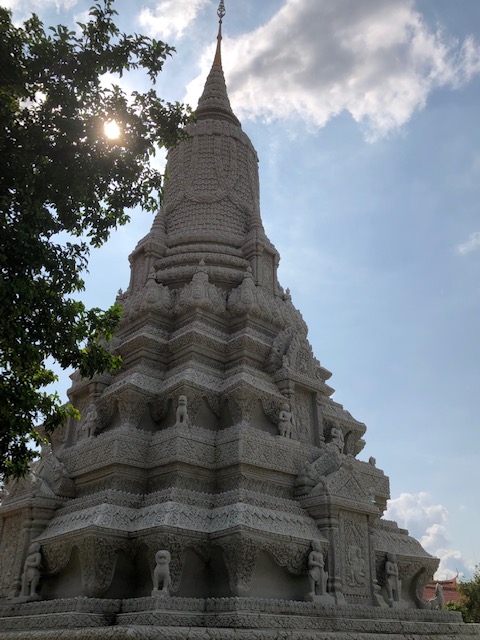 The Silver Pagoda (Wat Preah Keo) is a Buddhist temple and contains an emerald Buddha. It’s known as The Silver Pagoda because of the 5000 silver tiles that cover the floor. Unfortunately, these are hard to see, as the floor is covered up by carpet that protects the tiles from being damaged by foot traffic but there is a particular area that is off limits where you can see them – absolutely stunning! 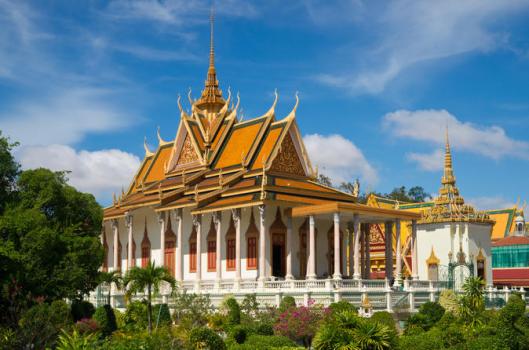 All visitors must remove their shoes before entering the pagoda and there are little cubby holes outside to put your shoes in.  I liked the interior of this pagoda with cabinets upon cabinets of statues, icons and precious objects.  It would of been nice to have known more about them and their significance but explanations, unfortunately, were not in English.  Unfortunately no photos allowed inside so nothing to show here!

We then decided to visit the Throne Hall of the Royal Palace.  Construction of the palace began in 1886 after the King relocated the royal capital from Oudong to Phnom Penh and was completed before World War I.

The Royal Palace is still the royal residence for the King of Cambodia and while parts of the palace with its golden roofs are closed to the public others like the Throne Hall can be visited. Topped by a 59m-high tower that was inspired by the Bayon in  Siem Reap’s Angkor Thom, the Throne Hall is used for coronations and other ceremonies. 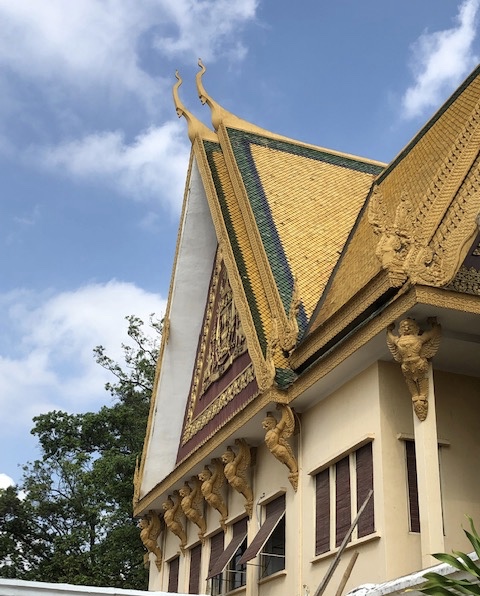 I think we had walked around for about an hour and a half and at this stage I was sure the sun was burning further into my skin, so we decided to leave.   We took a Tuk Tuk and returned to our friend Naomi’s home.  It was then time to finish packing and take a car to the airport…a fabulous trip away!