‘Above there is heaven, below there is Suzhou and Hangzhou’

Regarded as one of the two paradises on earth by the Chinese, Hangzhou (Suzhou being the other) is a wonderful place to visit.  So as I had to travel there for work in April 2012, I thought I would take advantage of the trip and stayed a weekend to enjoy some of the fabulous sights.  I stayed at the Hyatt Regency Hangzhou which is lovely and ideally placed in the centre of the city which afforded me the opportunity to to walk to the city’s main shopping and entertainment centres in Hubin district.  The weekends in Hangzhou, especially in summer and spring are incredibly busy with people everywhere coming to see the sights and walk around the beautiful West Lake. 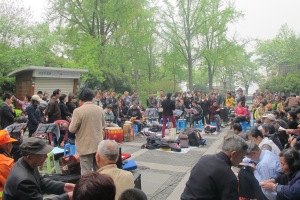 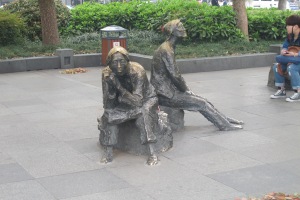 I love seeing the elderly Chinese people (usually men) with their large calligraphy brushes, writing calligraphy with water on the pathways.

West Lake is a freshwater lake in Hangzhou and is divided into five sections by three causeways. There are numerous temples, pagodas, gardens, and artificial islands within the lake.  It has influenced poets and painters throughout Chinese history for its natural beauty and historic relics, and it has also been among the most important sources of inspiration for Chinese garden designers. 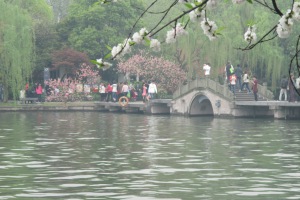 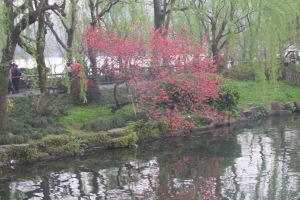 Over the centuries, the beauty and culture of West Lake has attracted numerous literati, who left behind works of literature and poetry to describe the lake.  Poets such as Bai Juyi, Su Shi, Xu Zhimo and Hu Shih wrote countless poems about West Lake. The Chinese legend ‘Legend of the White Snake’ is also set in West Lake and has been adapted into films and television series over the years. 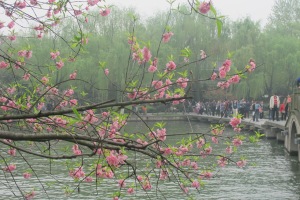 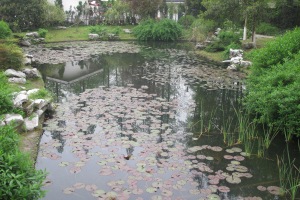 Spring is definitely the best season for enjoying the West Lake. The Lake is surrounded by beautiful blossom trees overhanging the lake, gorgeous little bridges and at the time I went, beautiful purple wisteria trees.  The green leaves of the trees and blossoms make walking around the lake even more beautiful. This is the same time that thousands of Chinese make their way to Hangzhou to see the beautiful sights so it gets a ‘bit’ busy. 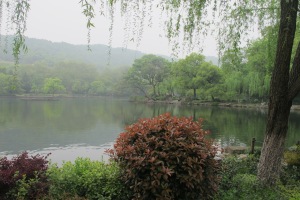 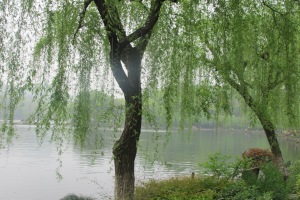 I returned to Hangzhou during winter and definitely not as many people as in the spring/summer months but it was lovely to see the Lake shrouded in a mist – albeit rather cold but I think it had a very romantic feel about it.

One of the best ways to see the lake is to take a boat cruise, which I did and had the opportunity to see the three miniature stone pagodas in the lake as they are the centrepiece of the lake called ‘Three Pools Mirroring the Moon’ which is perhaps the most famous of West Lake’s sights. Its image is printed on the one yuan bank note. On the night of the Mid-Autumn Festival, when the moon shines full and bright in the sky, a candle is lit inside each of the three mini pagodas on the water and the light from the pagoda windows and the moon cast their reflections on the water, hence the name.

West of Three Pools Mirroring the Moon Island stands the rounded hollow stone pagodas, with five round holes like windows around the top and bottom levels. They were built over 800 years ago and are two meters in height.

The famous Song Dynasty poet Su Dongpo once used these words when he compared the West Lake to Xi Zi the most beautiful woman in ancient China:

During my spring visit I also went to the Hangzhou National Tea Museum which opened in 1991 and covers some five acres.  The history and development of tea was very interesting as was learning about the impact tea has had on Chinese people and various minority groups.  Tea dates back to ancient China when it was eaten as a vegetable, used as medicine and then from the time of the Han Dynasty, was infused in water to drink. 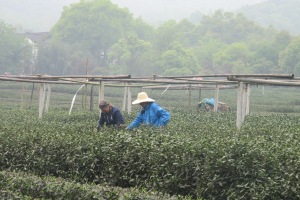 One particular hall within the Museum comprised around 300 teas and I was given the opportunity of tasting a few and ended up buying a beautiful teapot and some Jasmine tea.  There was also an opportunity to walk through the tea plantation to see the women at work, picking tea leaves and looking typical old world Chinese with their straw hats on.

Hangzhou was formerly romanised as Hangchow and is the capital and largest city of Zhejiang Province in Eastern China. It sits at  the head of Hangzhou Bay on China’s coast between Shanghai and Ningbo. Hangzhou grew to prominence as the southern terminus of the Grand Canal and has been one of the most renowned and prosperous cities in China for much of the last millennium, due in part to its beautiful natural scenery. 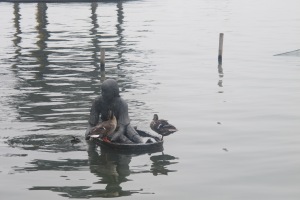