My last day in Wellington

On the last day of my recent visit to Wellington, my friend Nicola drove me to a hilltop suburb called Kelburn.  On the drive up I saw parts of the Botanical Gardens and the hillside terraced houses of the suburb.  I really wanted to walk through the gardens but I didn’t have enough time unfortunately. 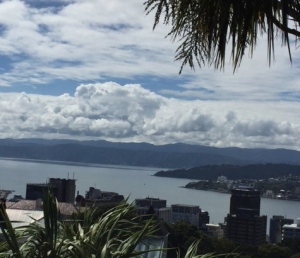 We then went for a drive out of Wellington and upon our return to the city we stopped off at a lovely waterfront pub.  We were lucky on two accounts, firstly the weather was lovely and secondly there was a vacant table outside overlooking the boats and water. 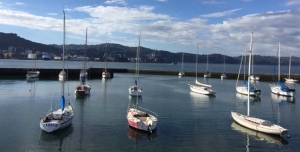 We sat around for about an hour enjoying a glass of New Zealand white wine and Nic ordered some fresh bread with flavoured olive oils and a little bowl of olives.  The menu had lots of good snacks but I knew I would be eating on the plane as I had pre-ordered a vegetarian meal, so didn’t order anything else.

Then it was time to freshen up before my three hour return flight to Canberra.  It’s great that it’s a direct flight from Wellington; so much easier than having to stop off at either Sydney or Melbourne.  We dropped into my friend’s city apartment and then head off to the airport.  This apartment was stunning with magnificent views of the water.

Not sure when I will get back to Wellington but I do know that I would love to visit New Zealand’s other major city; Auckland.  Maybe next year!!