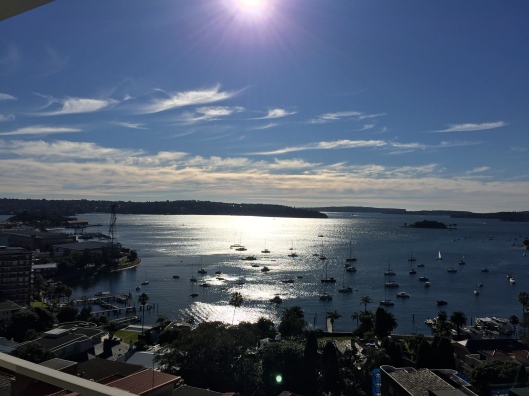 A few weekends ago, for the Queen’s birthday long weekend, I drove up to Sydney; met two of my friends and stayed in a fabulous apartment in Elizabeth Bay which is a harbour side suburb about three kilometres from the centre of Sydney.  This apartment overlooks the beautiful Sydney Harbour and we enjoyed spectacular views from the two lounge room windows and from the balcony and every morning I woke up to a stunning sunrise over the Harbour. 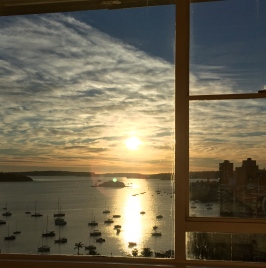 Our first evening we decided to stay in to catch up so first we went out and bought some lovely food from a local organic store.  We bought prawns/fresh bread stick/cheeses and biscuits and dips.  These we arranged on the table and sat down over a couple of hours, ate lots and chatted.  One of my friends had flown down from Queensland for the weekend and I hadn’t seen her for some time so it was good to catch up.  My other friend lives in Sydney and she arranged the apartment for us but as it only had two bedrooms she graciously gave us the apartment and caught a taxi home each evening to sleep, then returned the next morning.

The next day we took a walk up to some local markets to an area called Kings Cross colloquially known as ‘The Cross’ and is Sydney’s red-light district.  It used to be home to organised crime groups but now it’s really just a street with mixed services (railway, gyms, supermarket, bakeries) for nearby residents and entertainment venues including bars, restaurants, nightclubs, brothels and strip clubs for visitors. 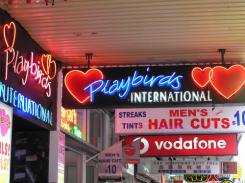 My Sydney friend and I ate corn cakes with avocado (she also had bacon); delicious (forgot to take my phone so no photos), then we went for a walk around the harbour and stopped off for a glass of wine at the Yacht Club – as it was such a lovely day we were able to sit outside looking at the water and the extremely expensive boats.  I don’t think I will be buying one with a price tag of hundreds of thousands to millions of dollars!!!! 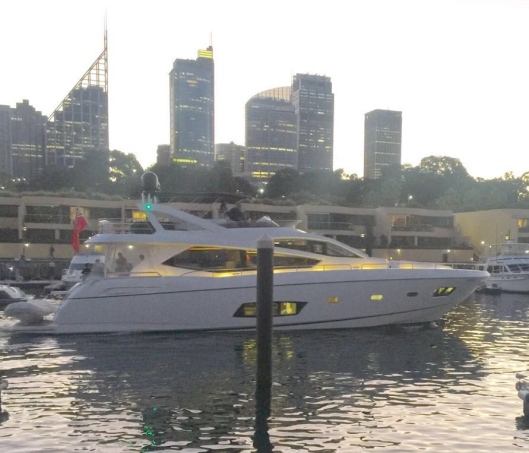 One of the special things we did whilst in Sydney was to go out to a ‘posh’ lunch  at Otto Ristorante along the Wharf at Woolloomooloo Bay which  serves modern Italian.  This post is a little bit longer than usual as there are more photos of our food.

Woolloomooloo Bay Wharf is the longest timbered-piled wharf in the world,and was completed in 1915. During its working life it mainly handled the export of wool, but also acted as a staging point for soldiers deploying to the World Wars as well as a disembarking point for new migrants arriving in Australia.  Now it’s been redeveloped as a a very expensive area comprising residential apartments [with fabulous water views], a hotel and restaurants; one being Otto which is favoured by many including movie stars..’Cam’ [Eric Stonestreet] from Modern Family lunched here when he was in Australia.! 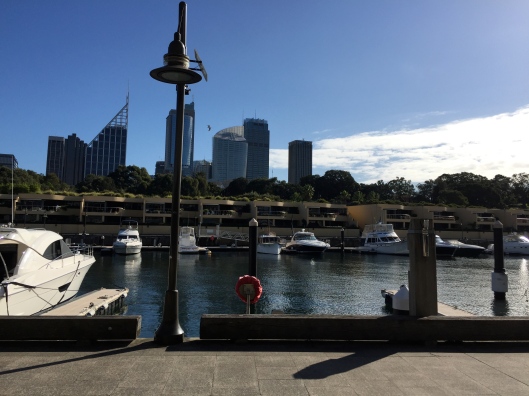 I also invited another friend and three of us started off with champagne and my friend Tracey ordered a cocktail.  The usual bottles of sparkling and still mineral water were also ordered. 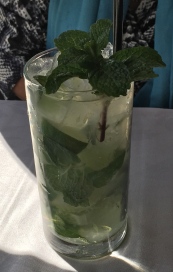 The service at this restaurant is excellent and I had read recently that there was an extensive vegetarian and vegan menu.  My friends all decided to  order the degustation and I was ready just to order from the vegetarian/vegan menu when our waiter advised me that there was a vegan degustation menu – excellent as this allowed me to eat the same amount of dishes as my friends and at the same time.

Firstly we were served some delicious rye bread with butter and my friends enjoyed an amuse bouche of goats cheese and jam sandwiched between a papadum type crisp bread.  I had something similar i.e. vegan cheese, but I can’t remember what it was as I didn’t take a photograph of it.  A bowl of salad leaves were also provided for the table. 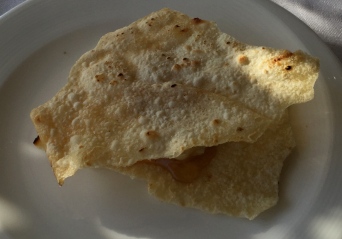 We drank our drinks and enjoyed the sun as we were seated outside and also enjoyed ‘people watching’ including a couple who clearly had discussed wearing the same outfit out to lunch that day.

This is the menu for the vegan degustation which I loved the look of and every one of my  dishes were beautifully presented and I have photographed each in order of arrival. 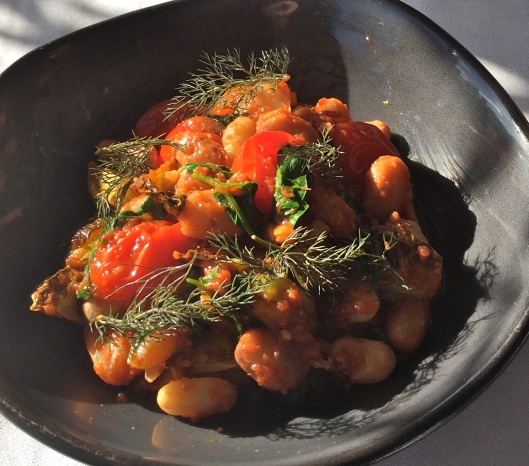 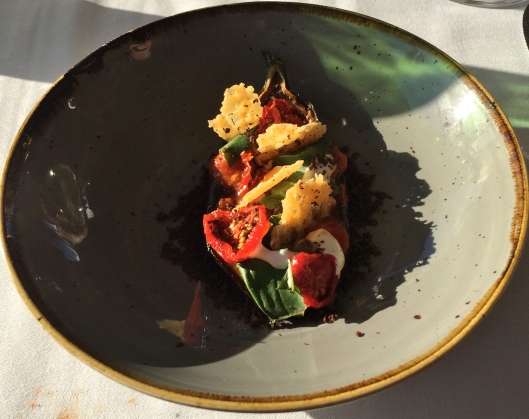 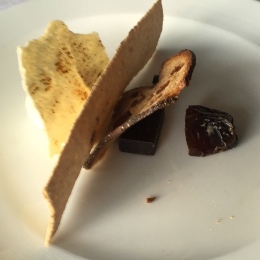 Sensational menu – I enjoyed each dish and if I had to choose one I didn’t really ‘love’ it would have to be the cannelloni beans – the dish was nice but I enjoyed others more.

After our first dish arrived, we had finished our champagne and cocktail so another round was ordered but this time, with different drinks.

Now for my friends non-vegan menu: 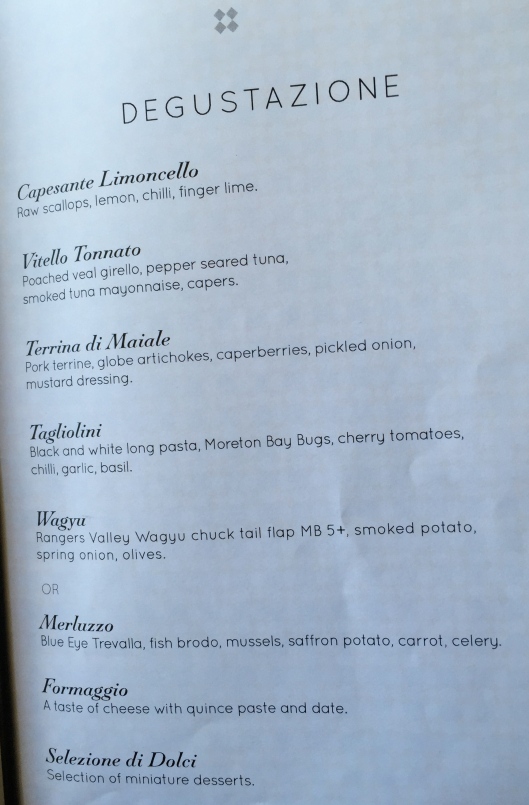 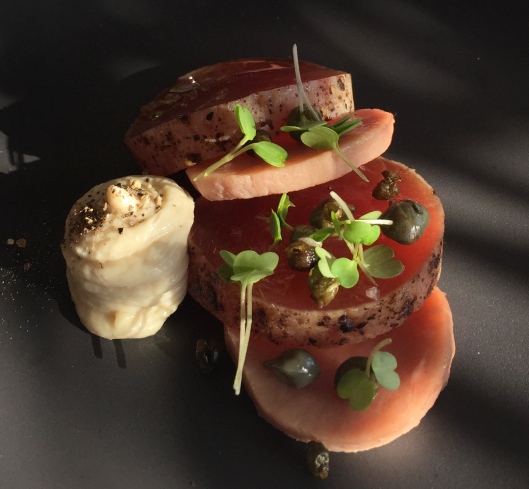 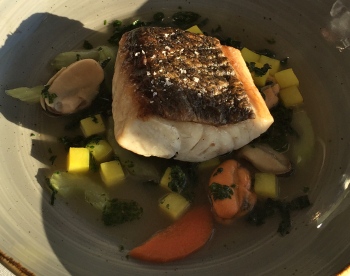 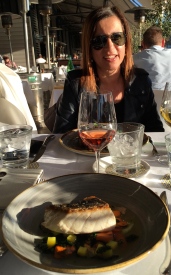 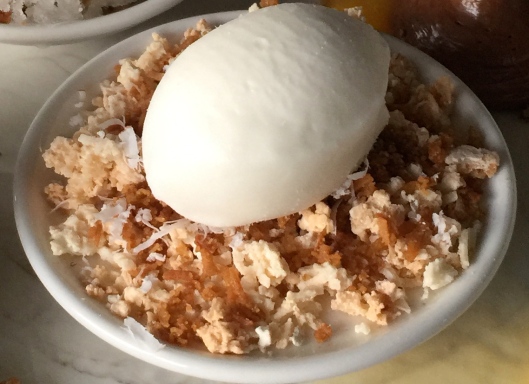 The afternoon was long and wonderful and by the time we finished our last drink and dessert, it was dusk…

We left the restaurant and walked back along the wharf to my friends car to get a lift home…such an enjoyable afternoon and a restaurant I will definitely return to when I go back to Sydney.