Our last day in Ningxia firstly involved a visit from the capital Yinchuan to Sand Lake. We took a boat across region’s largest fresh water lake.  The lake is home to over one million birds; we didn’t get to see that many but there were certainly a few thousand around.

The boat then dropped us off at a beach/sand dunes and we were told we had around forty-minutes before the boat took us back.

There was not enough time for a dune buggy ride so we had a little walk along the sand with millions and millions of these little flies (awful things) and as we were looking for shelter we saw a Chairman Mao museum – very unusual place to have one but we went inside to check it out…lots and lots of Mao pins and buttons and various other memorabilia. 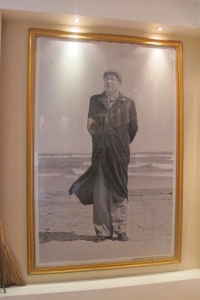 Our next stop was to see some rock carvings at Helan Mountain. This was particularly interesting as there were many and all carved by ancient nomadic tribes some 6000 years before the Qing and Ming Dynasties. They are simple in design but afford historians enough material to study the way of life, religion and war of the nomadic tribes.

Our final stop before heading back to our hotel for the night was to Suyukou National Forest Park but before we did we stopped off at a tiny restaurant where dumplings are made fresh following our orders. The restaurant only sold dumplings and even when we asked for some Chinese tea, we were told they didn’t have any but gave us warm water that had been used to boil the dumplings..my friend drank it and asked for more, but I decided as the meat dumplings had been boiling in it I wouldn’t drink it. The dumplings, however were delicious. 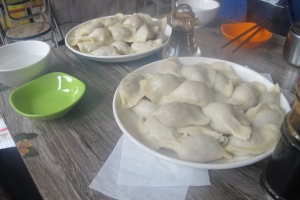 We had to first buy our tickets to access the park via bus and we were told we were the only visitors for the day and it was 3pm. This was probably as the temperature was around minus six degrees and very windy!! Once inside the bus we were told that the cable car to the mountain was not working due to the weather which was unfortunate as there was nothing to do at the foot of the mountain and we had a stop there for one hour. We got out of the bus and it started snowing…good because it was pretty, bad because we didn’t have proper warm clothing. 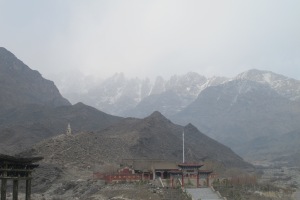 But I think we were meant to be at the foot of the mountain on that day as there we saw a pretty fat cat but who appeared to be hungry so our lovely guide went and bought some food then we saw two stray puppies and two older dogs, so we went and bought some meat and fed them all…a nice meal for them to enjoy and we felt very good we were able to feed them. Then the sun came out and the puppies started playing – a lovely sight! 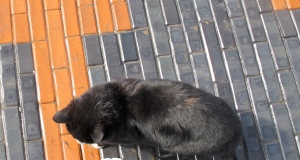 And then our bus driver must have felt sorry for us because he saw us walking around in circles and said he would take us back ten minutes earlier than the nominated departure time..hooray!!!  Next province to visit is Qinghai – about a two hour plane ride away from this region.