A weekend in Phnom Penh

In 2008, whilst I was working in Hong Kong, I arranged to visit some friends in Phnom Penh for a weekend.  I caught a flight from HK on a Friday afternoon and was picked up by my friends from the airport.  I didn’t really know what to expect but my friends lived in a fabulous [huge] house in Cambodia’s capital and it was interesting to see that the streets around where they lived were all really wide and tree lined…again not knowing what to expect this was a pleasant surprise. 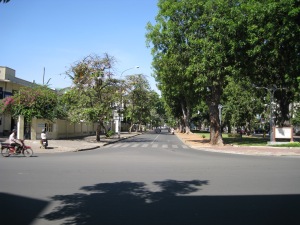 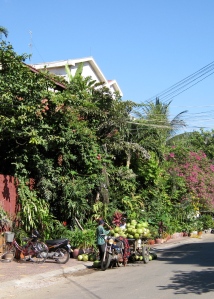 My friends had asked me before I arrived if I was interested in a boat trip along the Mekong River.  This is something I had always wanted to do so said a huge ‘yes’.  We caught our boat and for about two hours did a tour of the river and being the only people on the boat (apart from the staff) we had a nice time just sitting and relaxing and watching the world go by.

The river was pretty dirty and rather sad to see the poverty alongside with families living in tents or small boats alongside the river.  But it was an incredible experience to be on the Mekong!!!

Phnom Penh really is a wonderful city and one I am so glad to have experienced especially with my friends who had lived there for some time and knew the city really well.

During the weekend, my friends took me to some markets to buy the usual cheap bags/wallets/t-shirts/ornaments and other things which I bought in abundance!!

We also went and had dinner at this fabulous little local restaurant which had geckos on the walls…they were on all the walls all around the city inside rooms and restaurants…very cute actually…I liked them.

One place we went to which I found really interesting was the Foreign Correspondents Club which was a favourite haunt of foreign journalists when reporting news on Cambodia and located along the Tongle Sap River.  It’s a three storey colonial building and is now a bar/restaurant and hotel.

We sat upstairs and had views of the river and the local area…so enjoyable!!  Inside there are wooden seats and wooden bar tops and the walls are covered with nostalgic posters.  You can imagine foreign correspondents interviewing politicians and others before writing up their stories many years ago.  We also had views of the cluttered power lines that are generally seen all throughout the majority of Asia.

And my final stop on the Sunday before I returned to the airport to go to Hong Kong was to see Wat Phnom, a buddhist temple built in 1373 and is the tallest religious structure in the city.  It was so hot walking around the city [so hot] but it was lovely to see the places I did see.  I know I didn’t see everything Phnom Penh has to offer but what I did see was lovely and I really enjoyed spending time with my friends Mike and Jude.