A visit to Ditan Park during Chinese New Year

There are many Temple Fairs in Beijing during Chinese New Year and they are still  a tradition which was great for me as I had wanted to go to one during my time in Beijing.  So in 2013 I chose Ditan Park as I had read it was one of the most popular.  So some friends and I drove there (had to park a little way away but not too far) and we walked to the park which was about a fifteen minutes walk.  I think it cost about 10 RMB to enter (@ $1.50 AUD).  I knew there would be thousands and thousands of people there but knowing that I just went with the flow [literally]. 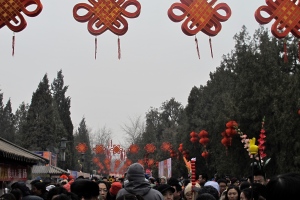 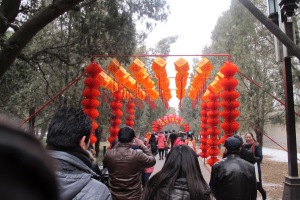 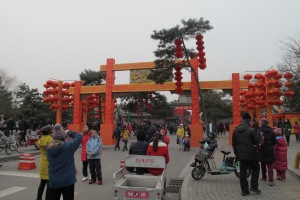 We walked into the park and saw many stalls along both sides of the wide path selling all sorts of things; balloons, arts and crafts, home made items, toys, souvenirs etc..we did make [push] our way to the stalls and bought a few silly things to carry.  It was funny to see (and I saw this all around China) if there was a place to sell something then the Chinese would but then another Chinese person would set up stall next door selling exactly the same things…funny!!

My friend’s daughter bought a blown up balloon animal on a stick…which was rather difficult to carry but she managed. 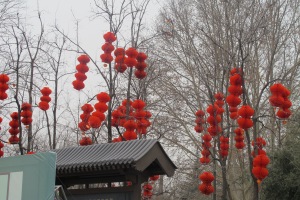 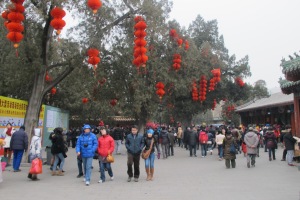 Lots and lots of my favourite Chinese red lanterns lined the streets and were hung in the trees and just looked fabulous. 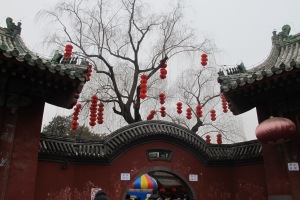 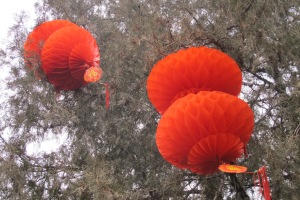 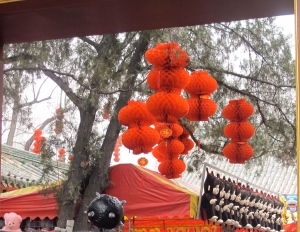 So what are the Temple Fairs all about…the tradition began as groups of vendors who did business near Buddhist and Taoist temples when many pilgrims came to pay tribute to the gods during traditional festivals. The practice grew and grew to what it is today…of course now there are not only the Chinese who attend but also expats and visitors. 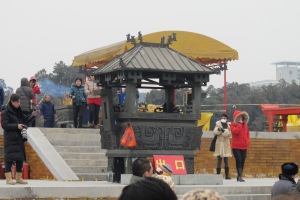 And Temple fairs in Beijing are not just held at Chinese New Year, they are held during major cultural events.  After we walked along the path that housed all the stalls we arrived at the food area…amazing…dumplings, buns, sweets, noodles…so much food and all smelling and looking delicious apart from the ‘stinky tofu’.  Really does smell!!

I had some noodles and dumplings which were delicious and so cheap and my friends bought some pork buns. 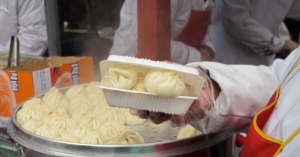 It was lovely to see everyone just having a wonderful day out as we did…we found a little area on the grass and ate our food and then took a walk around at the park where we listened to some lovely Chinese music, did some people watching and saw some cultural events…but I think the highlight of our day was the little Chinese girl who was rugged up to avoid the cold [as it being in February it was still very cold]….she was very cute and her mum was more than happy for us to take her photo. 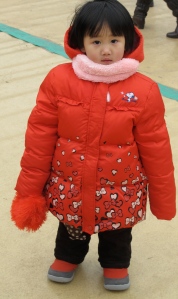 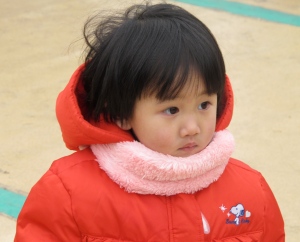