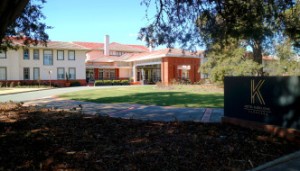 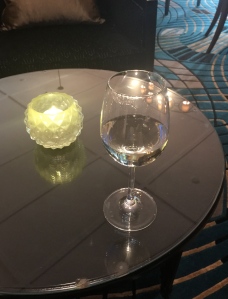 The Kurrajong Hotel, is located just across the road from my work in Canberra and has, in the past few years, been refurbished.  When the hotel was built, it was used as a hostel for public servants awaiting relocation.  But now it’s a good place to pop over after work for a glass of wine or great for a set lunch (again with a glass of wine). 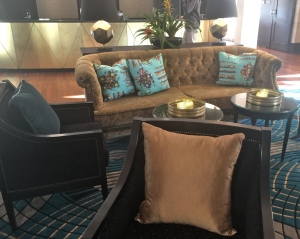 The lobby area is decorated in rich browns with bright blues and gold and looks very inviting especially in winter with the open fire.  It’s quite cosy in the lobby to sit for a couple of glasses of wine but it can get a little busy around 5pm when guests are entering the reception area, which is just at the back of the lobby, to check in after a days work in Canberra.

A couple of weeks ago some colleagues and I went to the Chifley Bar & Grill, which is named after Australia’s 16th Prime Minister, Ben Chifley who lived at the hotel for eleven years from 1940-1951.  We made a booking for a table on the enclosed verandah which was very nice but service was extremely slow both waiting to place an order for drinks and then our meals.  And it was not a busy day for the restaurant.

We all ordered from the entrée and main course Lunch Pre Fixe which has a vegetarian option for both courses.  Several of us had the pumpkin & ricotta tortellini with sage beurre noisette which was absolutely delicious.  For my main course, I ordered the porcini mushrooms and pecorino risotto – which was a little dry for my liking.  I have had the same meal on a previous occasion and it was delicious so perhaps just a bad day for the chef!!

Several of my colleagues had the wagu, pearl onion and pepper pie with parsnip crisps which most of them enjoyed but one colleague sent hers back as it was cold inside.  Once we had attracted the staff, they did offer a replacement meal.  It is a place I would return to because the ambience is lovely and I think it was just a bad day for service and meals.