A weekend in Qingdao, Shandong Province
A lovely weekend getaway is to take the train to Qingdao in Shandong Province. It’s a five hour train ride from Beijing or you could take the shorter plane ride, well of course that depends on whether the planes take off on time!! I took the fast train and relaxed in the comfy seats. My hotel of choice was the one year old Hyatt Regency which was absolutely gorgeous. I had read about it some time ago in one of the fabulous weekly Beijing mags and kept the article then when the time came, booked the hotel (using the equally fabulous Global Easy Travel) the hotel is located on the waterfront of the shi lao ren (old man stone) beach and my beautifully fitted out room overlooked the water- absolutely lovely views (www.qingdao.regency.hyatt.com). Jenny Anderson came with me on this trip and a big christmas tree awaited us in the lobby (not really just for us) along with several tall wooden nutcracker soldiers – a lovely reminder that christmas is just around the corner. Gingerbread delights also could be bought. 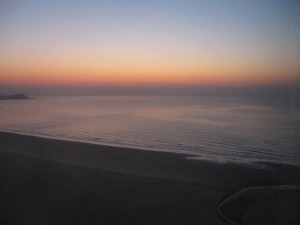 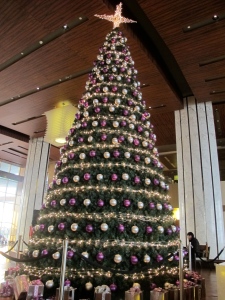 There are many things to do in Qingdao apart from drink beer and eat seafood – none of which I do. Our first day our wonderful guide and driver took to the Laoshan scenic area which is about a twenty five minute drive from the Hyatt. Beautiful sights along the southeastern coastline of Shandong with views of the East China Sea. Laoshan is China’s largest mountain coastal range lying midway along the Yellow Sea coastline. Mount Lao is one of the birthplaces of Taoism,however many of the mountains more ancient Taoist sites including temples,palaces and monasteries no longer exist. 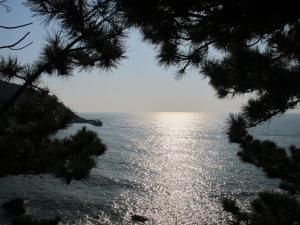 It is said there were nine palaces, eight temples and seventy two nunneries on the mountain when Taoism was at its heigh of prosperity. We went to see one surviving palace; Taiqing. Built in 140 BC during the Han Dynasty and covers an area of 300 square kms. The red and orange leaves on the Ginko trees were spectacular as were the grounds of the palace against a backdrop of Laoshan. 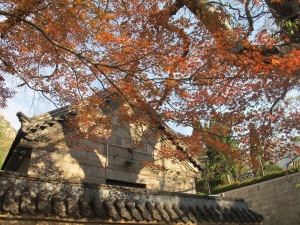 That afternoon we took Afternoon Tea at the Hyatt, (of course with a lovely NZ sav blanc for me) after which I took a walk along the boardwalk outside the hotel. 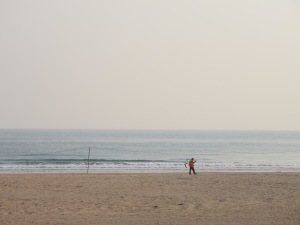 On our second day we visited Badaguan Scenic Area which used to have eight avenues that were named after famous passes in China. Hence the name Badaguan (eight passes). After the People’s Liberation two more avenues were built in the area however it is still called Badaguan. In these ten avenues there are more than 200 types of architectural styles ranging from German to Dutch. Fabulous old trees line the avenues and it seemed that each avenue was lined with different trees, unfortunately due to winter all were rather bare.

Then onto something completely different; a visit to the Qingdao Beer Factory and Museum . The Qingdao Beer Museum was very interesting even for Jenny and me who do not drink beer (ever). I even took a sip of the free beer at the factory, as this is site that a dear beer drinking colleague of mine from Guangzhou told me was ‘Heaven’. 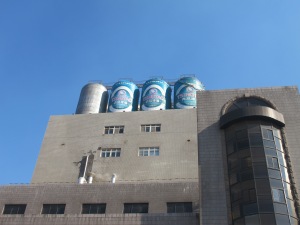 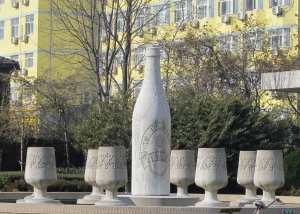 Next to Little Fish Hill Park which had spectacular views of the No 1 Bathing Beach in Qingdao, Qingdao Island and the majority of Qingdao. No 1 Bathing Beach was built by the Germans when they took over Qingdao and only open to foreigners. This, of course, has changed over the years and now the beach is open to all. I do recall an email some time ago showing a photo of an extremely crowded beach in China and wondered where it was, turns out it’s No 1 Bathing Beach…must remember never to visit in summer – at least you can see the sand and water in winter! Loved the small blue houses used for changing clothes into swimmers – awfully cute! 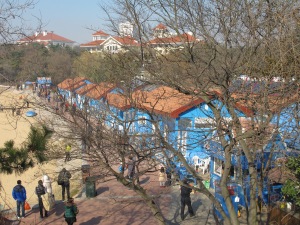 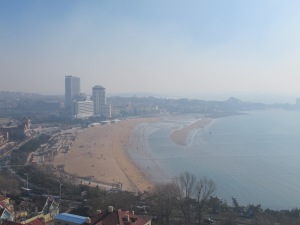 Qingdao is another place I really wish I had visited earlier, I would have returned several times – with its integrated modern city along with European styled architecture and wonderful beaches – it’s truly a beautiful city.

I have started this blog to initially record my travels around China and other parts of Asia during 2011 and 2014.