After leaving Beijing in January, I returned in September to do some further travel to Inner Mongolia and Gansu and to see friends. During my visit I took two one-days trips; one to the Eastern Qing Tombs and the other to Simatai Great Wall. As usual, I wanted to write about my trips and Frances very kindly agreed to publish my articles again for BB’s. I actually miss my monthly contribution to the Bits and very much miss my travelling around PRC and other nearby places. Back to my day trips…both places were interesting and scenic especially as I had not been to either in my three years at Post.

My first day trip was to the Tombs which are located northeast of Beijing in Zunhua, Hebei Province about a two hour drive from Beijing (using trusty driver ‘Mr Mike’). The Tombs are surrounded by four mountain ranges and five emperors, fifteen empresses, over a 100 imperial concubines and various princes and princesses are buried within the eighty square kilometre site. If you are thinking of visiting a nice idea is to take a picnic as there is limited food etc on the grounds and there is enough shade and places to sit for an hour or so to relax in-between tomb visiting. The cost of entry is about 152 RMB but this affords you the opportunity to visit all tombs – too many for one day though so perhaps still a bit pricey.

I visited two tombs; the Yu Tomb (belonging to Xian Long who was the 6th Emperor of the Manchu led Qing Dynasty – a ‘good lookin’ rooster’ as we say in Australia) and the DingDong Tomb belonging to the Empress Dowager Cixi, a powerful woman who was said to be the power behind the throne for forty-seven years during the Manchu Qing Dynasty. A long day but very enjoyable.

A friend also told me of a single standing tomb about a five minute drive away from the Qing Tombs. So on the way home, Mr Mike found its location and with no entry fee and no people it was great to see. 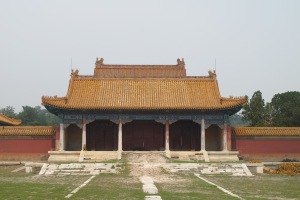 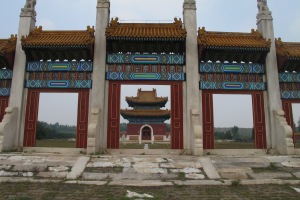 One other day trip I definitely wanted to do was to re-visit the Wall. I didn’t really mind which section but Mr Mike told me about Simatai located in Miyun County, which had been closed since 2010 but recently re-opened. So again hired a driver and with two friends set out. We left early so it was a good drive without traffic as we were travelling about 120 kms northeast of Beijing. An entry ticket was about 110 RMB which really was to access a new water town (Wtown and also known as Gubei Water Town). This ticket does not give you access to the cable car to the Wall. On the internet later, we found out you can visit the Wall and not pay for the Water Town as long as you book on-line and arrive at the allocated area to depart for a Wall tour at either 10am or 2pm, otherwise you have to pay the 110 RMB for access through the water town. However, I am really glad we did not know about this as I really enjoyed strolling through the water town.

We got lost in the water town which was fortunate as we came across a lovely little courtyard with a display of dyed cloth blowing in the wind. Inside was a small factory with demonstrations on how cloth is dyed – really interesting. 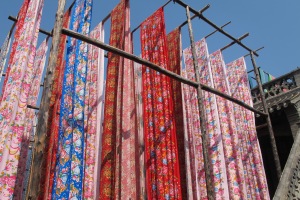 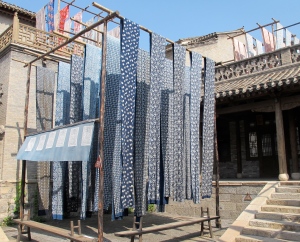 After walking about an hour through Wtown, we took a cable car to the top of the Wall (not really the top as there are still are about 150 steep steps to climb…grr)and then walked on the Wall – Simatai is incredible, very untouched with spectacular views. My friend only told me when we arrived that Simatai is known for its steepness (grr again) Unlike Mutianyu, there are no side walls so for me it was confronting – my friends walked from turret number 8 to number 5 on the Wall and then walked along a different path below the Wall to return to me at the cable car. Very few people were on the Wall and one fellow had just walked up (about an hour and half) and said the climb was very steep and steps not in great shape. He said it would be a little difficult to walk down due to that steepness. We intended to walk down but after this advice decided it was not a good idea (I was very happy with this outcome). If you don’t buy a return ticket on the cable car (120 RMB) it will cost you 80 RMB each way (and we did try and get a discount even though we didn’t buy the return ticket, but no luck). We had lunch at a little restaurant at Wtown overlooking the water where the menu was completely in Chinese but between us we ordered a sensational eggplant dish and cabbage dish; with rice for three people at a total cost of 76 RMB!! I love China!! 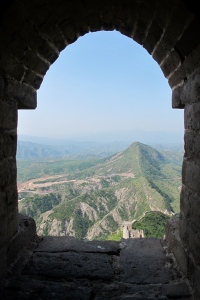 We were also very lucky with the weather, blue skies and a sunny day which made for a fabulous day out.