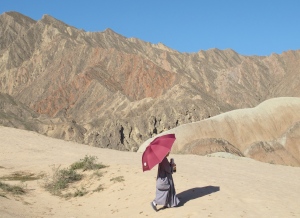 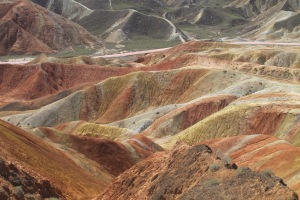 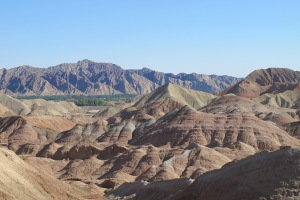 My only lengthy trip during my visit to China in September was three days in Gansu Province to see the Rainbow Mountains. Whilst working at the Embassy I did travel to Gansu to see many sights but did not manage to see the Rainbow Mountains which are located in Linze. I flew from Beijing to Lanzhou and was picked up as I really wanted to visit the Gansu Provincial Museum in Lanzhou (70 kms from the airport) to see ‘Ma Ta Fei Yan’ 马踏飞燕 [Bronze Galloping Horse treading on a flying swallow]. Ma Ta Fei Yan was originally buried at the Leitai Tomb of the Eastern Han Dynasty. The actual tomb where Ma Ta Fei Yan was buried is located in Wuwei County about a four hour drive from Lanzhou. This tomb was found by local farmers in 1969 beneath a tree. Ma Ta Fei Yan which was taken to the Lanzhou Museum for display along with many other interesting artefacts. Wuwei County leapt to fame with the discovery of this national treasure.

My tour guide [who has extensive knowledge of Ma Ta Fei Yan as it was his main subject in his tour guide exam] told me that the bronze represents sculptures of the Han Dynasty. The horse is relatively small and measures about 34 cm high and 41 cm long and the posture is unique and carefully balanced according to dynamics. It was created about 2,000 years ago and the positioning of its four legs strictly conforms to that of a living horse which is highly praised by many local and foreign archeologists and artists. The horse is raising its head, neighing and galloping forward with one foot is treading on a flying swallow and that the swift flying swallow sets off the amazingly fast speed of the galloping horse! 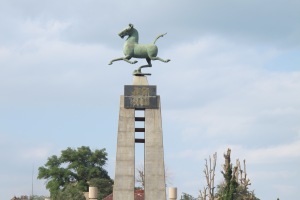 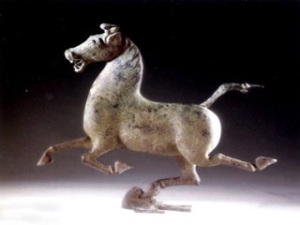 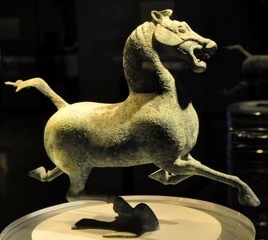 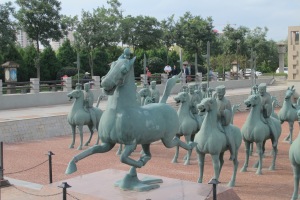 There are several ways to get to the Rainbow Mountains in Linze County – a flight from Lanzhou to Zhangye (closest airport to Linze) is about an hour and a drive is around seven.I wanted to drive so that I could stop off at the site of the Leitai Tomb which is on the way to Zhangye. Seven hours is a long drive and I don’t think I would do it again, especially as I had done a long drive in Gansu previously, but we did stop off for lunch and to visit the Wuwei Wan Temple or Confucius Temple. 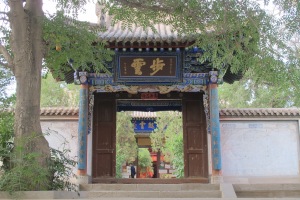 This temple is a sacred place for ancient scholars to worship Confucius. It was first constructed in the 4th year of the Ming Dynasty and has expanded exponentially since then.

In Zhangye, I stayed at the Qilian Shan Hotel which was clean and comfortable. The day after I arrived, I spent several hours visiting the Rainbow Mountains in Linze which is about sixty-five kms from Zhangye so not too far to drive this time. The landforms date back 6million years and were formed by erosion of the red sandstone. Stunning, beautiful and incredible is how I describe them. A must see during any long/medium stay in China! 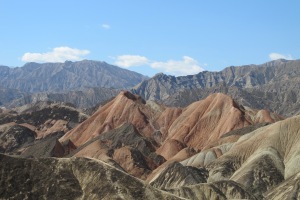 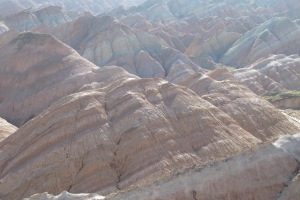 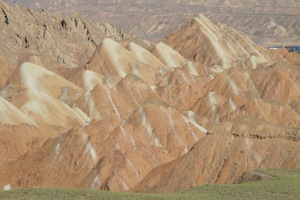 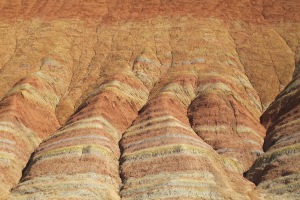